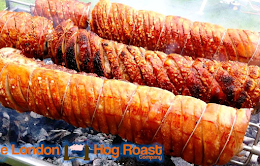 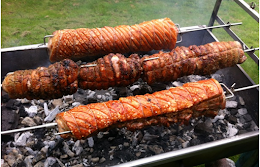 The London Hog Roast Company were delighted to do a 4 Pork Loin Spit Roast for Mr & Mrs Thompson at their home in Wimbledon. The event for sixty guests was to celebrate their 20th Wedding Anniversary and The London Hog Roast Company were asked to supply an appropriate Hog Roast package for sixty guests together with salads and a small number of vegetarian dishes.The event was a great success as the guests all arrived early and many spent the afternoon quizzing the chef on how to produce the 'perfect crackling'. The Loins were ready on time and all agreed that Steven, the chef, had indeed produced the 'perfect Crackling' along with the succulent, juicy pork accompanied by Coleslaw and a Fresh Green leaf Salad. Steven received a round of applause as he said his goodbyes with the hosts promising to book again.